If so-called climate skeptics want to project one falsehood above all others it's that their quest is a dispassionate search for truth in the spirit of openness. Ben Pile obligingly demolishes that sacred cow by refusing to answer a simple question :

Ben's answer is a question of his own :

This is all in the context of a 2650 word rant in which Ben dismisses prominent academic Professor Stephan Lewandowsky as “nothing more than a bullshit artist". It is those words (which are also an ad-hominem attack) that make his own qualifications germane. I could add that Ben frequently writes for Spiked on the subject of climate change and environmentalism and he is also environment advisor to Godfrey Bloom MEP. That's right,  a legislator in the European Parliament who frequently lambasts climate science chooses to get his scientific advice from a man who is embarrassed to reveal his own scientific qualifications.

Of course Ben's entitled to his opinions, but are those opinions informed by any relevant educational qualifications or not? Sadly that's a question no so called climate skeptics are asking.

Bizarrely Ben describes my contribution as a "a mealy-mouthed attack on my qualification to speak about Lewandowsky’s bullshit."  Emphasis added. So Ben is clearly alluding to a qualification that he isn't prepared to reveal, and he considers probing in that quarter to be off-limits.  Ben, if you're reading this, what is your qualification? That is all I'm asking .

Indeed Ben has now deleted our entire exchange from his blog. I wonder if he would claim that deletion is in the spirit of openness and a dispassionate search for truth. 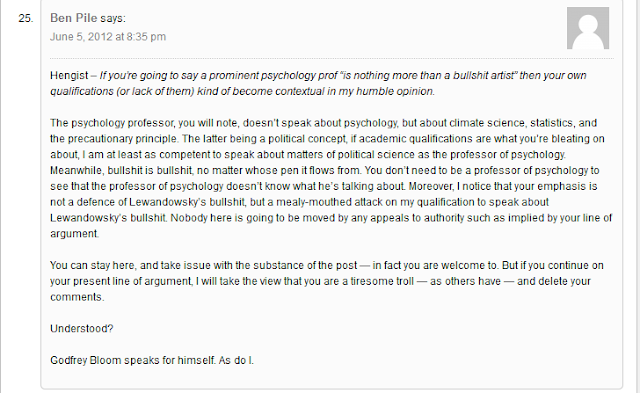