The Death of Harambe Doesn't Add Up

'It was the right decision' says zoo director Thane Maynard when talking about why Harambe the gorilla was shot.

That moves the conversation way past 'were gonna have a full enquiry into how this child got into the enclosure in the first place', or 'did zookeepers enter the enclosure in the ten minutes the child was in there with the gorilla?' Neither of which are questions being asked.

But watch the video of the press conference and at 22:45 Maynard admits the child was unhurt.

He was in there for ten minutes, with a silverback gorilla, he had fallen 15 foot and he was unhurt. So the framing of concerns as misanthropy or animal rights blathering is nonsense. Maynard also tells us 'gorillas are dangerous animals' and 'it was not a gentle thing' and 'this was a life threatening situation' . Yes yes but there is a difference between play and being mauled by a gorilla. If that gorilla had intended to maul the boy he wouldn't have lasted ten minutes , and he certainly wouldn't be unhurt.

I don't know if it was right to shoot the gorilla, but I certainly don't think it's a conclusion that can be instantly jumped to. The zoo is at least partly to blame here.  Zoos are supposed to be childproof. Lessons need to be learned, I dont hear that coming from this particular zoo director.
at Saturday, June 04, 2016 No comments:
Labels: Cincinnatti Zoo, Harambe


I can barely read it myself through the tears when I think of the enormity of this artistic masterpiece. For this is the ultimate work of art. By that I mean the terminal one. It is the necessary end of an artistic evolution that started 30,000 years ago when ice-age artists painted animals in Chauvet cave. They had no spectacles, of course. That is why the horses they painted in Chauvet are all blurred together.

Buried in this BBC report about the Summer Solstice are the words "The festival, which dates back thousands of years, celebrates the longest day of the year when the sun is at its maximum elevation and usually has a real party atmosphere." It's really significant because the BBC is the mouthpiece of the British Government and during Prohibition of Solstice celebrations at Stonehenge that line varied considerably. Read Andy Worthington to see what I mean. 'Festival' was a kind of dog whistle for the Chief Constable of Wiltshire, a coded message if you will. The Druid's chief negotiator Rollo Maughflynn sometimes called it the F word. Police contacts said that so long as the word 'festival' appeared in any countercultural literature in reference to any forthcoming solstice - emergency powers would be applied. Those emergency powers were a breach of human rights. How that deadlock was broken, and my very small part in it is a story for another day. But to seasoned stonehenge watchers the fact that the BBC now issues a positive retrospective can only be good.
at Monday, June 22, 2015 No comments:
Labels: solstice, Stonehenge

The drip feed of cycnicism in the Westminster child abuse scandal.

I had a JFK moment this morning. Like when Ruby shot Oswald kind of way - a realization that even when everything changes everything stays the same.

But first : The jailing of Rolf Harris represents a cultural watershed. Most people alive in Britain today were entertained by him as kids, and as adults too. He was hip well into his seventies playing Glasters and painting the Queen, now he is a guest at Her Majesty's Pleasure. Coming to terms that Rolf was a kiddie fiddler all along is tough, like a catholic learning that the Pope wears women's underwear or that Paddington Bear is a mule for a Peruvian drugs gang. But over the past few days this has been overshadowed by the development that not just slebs but Westminster grandees allegedly were paedophiles too.

So this JFK moment was when I heard an MP say on the radio that the Westminster Child Abuse Inquiry will amount to nothing because Dickens was never taken seriously by other MPs so whatever is in the lost Dickens dossier "wont stand up in court". End of story. I realised then that 'lower your expectations' will be a strong part of the narrative drip feed in this.

Even if they do find it whatever is in the Dickens dossier doesn't rest on Dickens character since he is dead. But this was a Member of Parliament deriding Dickens, a legislator underming the courts. And because it is his house that suspicion falls upon surely any comment at all from an MP at this time would be inappropriate. It is all so indicative of sinister manouverings behind the scenes.

Perhaps I should leave it there. But noone reads this blog so here with more cynicism than sense I wonder how this might play out. The Inquiry will find no evidence, because it 's all been destroyed. Then one friday morning Danczuk will be found swinging from Blackfriars Bridge. The coroner's verdict will be suicide. Most people will either accept that and move on, a minority will not care why that is even relevant and move on. And a small number of people will remain deeply suspicious. But they will be the same sort of people who never believed Oswald shot JFK on his own .
at Tuesday, July 08, 2014 No comments:

Why can't we have climate truthers and 911 skeptics?

What idiot coined the moniker '911 truth movement'? The name suggests truth is a known thing to communicate to the wider world. That seems to go a little too far to me. The key message of the so-called 911 truth movement ought to be that we don't know the truth, and never will, that the truth has been suppressed. And that what we think is the truth, the findings of the 911 Commission, is far from the unchallengeable certainty touted by the MSM. The common thread of so-called 911 truth is skepticism of The Official Story.

On the other hand running through the heart of climate skepticism is the belief that truth about climate science has been suppressed, that the wider disinterested public is being misled. I know they don't like to be called deniers so how would our climate skeptic friends feel with the label Climate Truthers?

It's a point I've been meaning to make for some time, and was spurred on by watching this excellent documentary about the scientist Steven E. Jones who has published peer reviewed work strongly suggesting the twin towers were brought down by explosions. Now theres a hell of a crossover between science and politics in his field. Science. It's like a candle in the dark.

Blogosphere Latest - They had weather in the 1970s


To you and me the 1970s were all about bell bottomed pants and platform shoes.  But to our climate skeptic friends the 70s meant something else altogether: climate predictions of an ice-age.  To illustrate the point Popular Technology.net uses a 1977 cover of Time Magazine headlined "The Big Freeze" whilst listing an impressive 60 climate ice-age predictions. The post is echoing round the skeptic blog-o-sphere already .

Whooops that particular 1970s cover was about the winter weather not the climate. 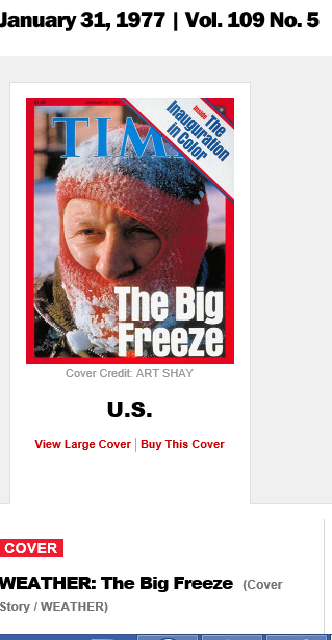 Here's a strange boast. As I write this I am the informant in a police corruption investigation. It's not a comfortable position I can assure you, every time I have brought the corruption to the attention of the police I have made a note of who I have spoken to. On a couple of occasions the cops who I made the allegations to turned out to be corrupt themselves - playing a dual role, it is only to be expected of course. Once the police switchboard operator asked "can we phone you back? " Instinctively I answered no absolutely not. I have raised the matter a total of six times since November when I first answered bail.

It's very unlikely to go anywhere. Only the police can investigate a thing like this, and they have a habit of closing ranks. When I first raised the issue with the police (see previous blogpost) I forgot to mention the sergeant who was handling me bounded out of the door a second time with all the bumf for escalating the matter to the Independent Police Complaints Commission, I figure I have played my hand well by not taking that poisoned chalice. Police corruption is not the only plank in my defence, it addresses the motivations of the police force's interest in me. I am able to blog about this now because I learned last week that their investigation into me has concluded with No Further Action.

You might wonder why being the informant in a police corruption investigation is so uncomfortable. Well, let's just say one doesn't know how deep it goes, and it's impossible to manouver into this position without learning things you really don't want to know and if it all goes pear shaped they could harass me for wasting police time, I suppose.

What has all this got to do with anything? We live in a corrupt paranoid society, we mostly collude with it all too. It's everywhere goddammit. Here's two examples brought to my attention just now. One is about a corrupt lawyer, and the other from the New York Times is about the corruption of youth, in the context of the second amendment, no less.

I can offer no tips on how to fire your lawyer or how to tell the police they are corrupt. But the New York Times article may yet inspire me to write a blogpost entitled 'How to make a very comfortable living through astroturfing without really trying'.
at Monday, January 28, 2013 No comments:
Labels: Astroturfing, Aylesbury, corruption, police corruption, second amendment
Older Posts Home
Subscribe to: Posts (Atom)